SOC: Listen Up! Experiences of Students of Color on the Cape 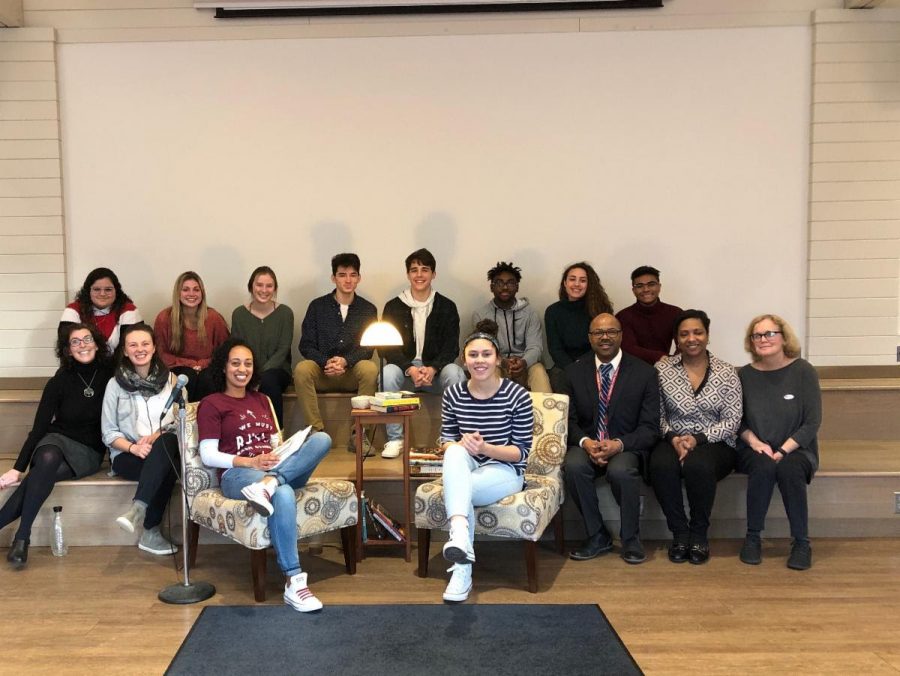 Listen Up! Experiences of Students of Color on the Cape was a community event, open to all, held at Falmouth Academy on the evening of Tuesday, March 3. It came on the heels of Black History Month and at the beginning of Women’s History Month, which was a perfect crossroads for me, as I am a student, a person of color, and a woman. All three of these identifiers put me in a marginal position to the dominant culture, which remains adult, white, and male, giving me a unique perspective about power and vulnerability. For this event, I was asked to participate and share my experience as a student of color. The evening was one in a series of listening events sponsored by the Woods Hole Diversity Action Committee (DAC). For this event, Falmouth Academy Students of Color partnered with Falmouth High School’s Diversity Group to offer ten personal stories by students about their experiences with race and racial bias, in the hope of heightening awareness and, ultimately, furthering allyship and inclusion.

It was a tall ask of high school students, to put in writing something so vulnerable or, God forbid, identifiable. To mitigate some of the personal cost and maybe even to boost participation, the organizers astutely organized the event so that the writing was read aloud anonymously by other people. Each story was read by an ally followed by a pause to allow the listener to feel through it while quiet music played. The rules laid out by the DAC for these events were simple: “Come with an open mind, be respectful, and NO talking.” The goal for these events, as stated on the DAC website “was to create a setting where voices were heard, where they would not be interrupted or have their stories denied or minimized; where listeners were challenged to think about their community and how people of color’s experiences are different than theirs; and where listeners could learn how to be [better] allies.” Three of the students allowed me to include their stories here. I am deeply grateful for their honesty and bravery in speaking up so that we could hear. I ask you, as you read their stories, to do so reverently as the experiences shared are deeply personal. Where we can truly hear these stories is from that place where we meet each other in our common humanity. I invite you to tap into that and read on.

For years I failed to understand my racial identity, being mixed. It never occurred to me, growing up in a multiracial family with my white mom, black dad and younger, like me, mixed brother. Younger me did not see the need for a label, for though it was melanin that divided the world, the US, I had never, ever seen this separation in my school or home.

In elementary and middle school I was ignorant of the world outside of my own sheltered one. Then, in 7th grade, I started to a new school and made new friends, and a few looked like me. I had never before met kids who were mixed like me. In the overwhelming sea of white, I saw a few faces that looked like mine, and they understood my confusion and struggles, but still, we were different. They understood their identities, whereas I did not.

One day, I attended a meeting with my fellow students of color during lunch. I came back with a life-changing realization. Afterward, I walked into class, looking around at the faces, and it was like my brain and body were separate. I sat down and tried to pay attention but I felt genuine confusion. Then, comprehension washed over my face. I could not get out of my head the realization that I was mixed and that I finally knew “what I was” and understood that my racial identity would not leave my head.  I continued thinking about it through the rest of my classes; my newfound understanding added a new dimension to me, my outlook, and my beliefs. I became enlightened. I am mixed. I have found and now understand my “label,” my “title,” my “category,” but, most importantly, a part of myself.

“Is your “real name” Maria?,” I was asked one day on the bus ride home when I was in middle school. I laughed, caught off guard, not only by the question but the feeling of absurdity it sparked within me. When I questioned why my friend was asking, the response I got was so basic. “Well, you are Italian aren’t you?” I remember thinking about this for a moment and replying, “Yes, I think I am, but I’m actually multi-racial. My mom’s a mix of Italian, Irish, and Welsh and my dad’s mostly Cape Verdean and Portuguese.” This was the first time I ever questioned my racial identity.

I attended a mostly all-white elementary school and lived in a mostly all-white neighborhood, so I didn’t think much of my racial identity. Due to my homogeneous racial experience, race wasn’t something that readily defined me. My sense of my racial-self was uncharted territory. But that changed following that bus ride.  All I could think of was, ”Who am I? What am I?”

Soon after that first question, I started identifying myself as multi-racial. Claiming that identity allowed me to reconcile my experience of school and neighborhood with my dad’s family and their experience, which I was coming to realize was part of my story, too. I felt better in my skin and it gave me a box to check. However, my fledgling confidence faltered with my first in-your-face personal encounter with racism when a school friend, infamous for merciless teasing, started calling me “Halfrican.” Initially, I was shocked, hurt, and ill-equipped to deal with it, so I internalized the confusion and shame while keeping up a brave face in front of the group. After processing it, I circled back to address the friend and stand up for myself. I wish I could say the ribbing and name-calling ended after that, but it didn’t. What changed was my reaction to it and my tolerance for such things. I found the courage and words to set things straight and then I kept going. I’ve had to do something like that every so often since then.

In one case, I was part of a group chat in which a classless comment was made. The individual wrote, “she’s black confirmed.” This was in response to a photo where I and other students of color stood for a photo at a Black History Month event. I was infuriated and hurt by the comment and stood up for myself. Not only did I have my own back that day, but I found an ally in a friend on the chat as well. They stood up with me, shutting down the remark that was justified as ‘just a joke’.

Depending on the relationship, I approach racism as either a “teachable moment” in the hope of working through it or I just say my peace. This has helped me become stronger and more steadfast in knowing who I am. I believe I am a multi-racial woman, who is vulnerable but strong, kind without being swayed out of her beliefs, someone who is light and fun but won’t stand for injustice. I hope others find out who they are too and their impassioned voices make a mark.

As a man of color, I can remember the hardships that followed me. I used to live in Lowell, MA, and I went to a predominantly white school that I thought would have been the end of me. I was always confronted by bigger white kids that thought I didn’t belong. It always resulted in bullying, and I never stood a chance. The bruises always healed, but never on time.

My mom was always at work, so if I was lucky I would see her for an hour a week because she left the house early and came home late. I would tell her that I just fell down the stairs trying to get to the next class, which worked since our school was 8 stories high.

“I’m impure” was always the thought that went through my head when I was being beaten. I fought back once, and I was the one that got in trouble for hitting ‘an innocent person who I’m supposed to treat like a friend’. It went on for so long I think I was around 6 when I just stopped resisting and let them beat me. If they hit me hard enough, I might never wake up again and then I won’t have to feel pain anymore.

Eventually, I moved to the Cape. I was terrible at making friends, but slowly I saw that people weren’t like the ones that I left back in Lowell. Last year in April, I remember Mrs. DiFalco asking if I wanted to join in on an AISNE trip, where people who have some heritage of color go and we share experiences and ultimately, just have tons of fun. Truth be told, I was reluctant to go, but I’m glad I did. When we got to the campus, there was a beautiful courtyard where all these amazing people gathered around. The trip was only like 16 hours long, but in those 16 hours, I was witness to people who would share experiences with one another and find out that they had a lot in common. In those 16 hours, I made some of the closest friends that I’ve ever had, and it was truly the first time I didn’t feel like I was being ganged up on by a community because the friendly atmosphere made everyone feel like family. When I left, I felt like I was missing a piece of my character and emotion because in that short time I had shared those emotions with other people, but at the same time, they had done the same so in a way, we were all with each other in the end.